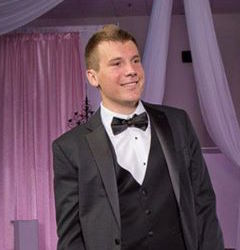 Stetson Gregorio (The little engineer that could)

Stetson looks like a cool guy, doesn’t he? That’s because he is. He’s also going to school to become an engineer- so he’s a smartypants. This is good, because having a cool, smart DJ means you’ll have someone who will make sure everyone has fun, but still be in control of your reception. Plus, if

ever comes up in the middle of conversation, Stetson will be able to solve it while dropping some mad beats.

In all seriousness, Stetson IS cool as a cucumber and really passionate about his craft. He prides himself on being the only DJing, trampoline-jumping, bridal-show modeling engineer out there; and that pride equates to a confident performance from someone who cares on doing the best job possible.